Before this year ends, include sipping the best bowl of Japanese ramen in your winter bucket list! This deliciously slow-cooked pork bone soup may be added of squid ink, pork meat and boiled egg for an experience like no other.

I've been longing to taste this quite famous Butao Ramen and this year marks my first time to do this. At first, I thought the name just sounded so funny. Seeing its odd "black" color from the Instagram photos and that of friends, I found it interesting. It heightened my curiosity on how it becomes most sought after as a night of drinking ends in Lan Kwai Fong. 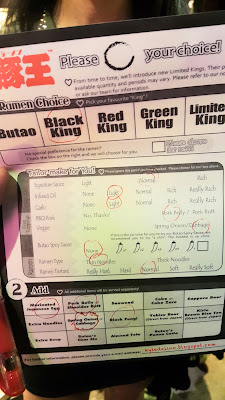 For a HK$95 a bowl, it's amazing to have a feel of putting together preferred spices, flavour, and type of noodles. Basically, here is a list of the add-ons and the price it comes with as you rediscover yourself listening to your own preferences to further enrich your soup.

I preferred Black King over all the choices because squid ink always gives this distinct flavour that makes anything naturally robust with seafood zest. It gives a sweet follow thru to a mouthful serving so it's an explosion and a fusion rolled into one. It came to a point that my soup ended a bit salty though after eating up the noodles so I didn't finish the rest of my soup anymore.

The shoulder butt gave my palate rest from the tangy consistency of the black soup and the marinated egg was boiled perfectly. It got a good lava flow as I opened the egg which smoothly folded into my soup. Ahhhh.... even thinking of it makes me miss it so much.

This is an amazing feel of Japan since they aimed to satisfy their customers not only thru their food but also thru the ambiance and the people. They greeted us in Niponggo and the interior had private booths where people may enjoy eating their ramen even if their alone comfortably.

Located at 69 Wellington St., Central, it was the perfect place to get our stomachs filled before hitting the streets of Lan Kwai Fong for a drink instead of checking it out after.

This particular branch is quite smaller than the one in Causeway Bay and Tsim Sha Tsui so expect to be in line for a table. Parking available is just street parking and do know that you can only pay cash upfront. Tea and tap water comes free with your meal. Price range starts from HK$98-120 for every meal. Take Exit D2 as you reach Hong Kong/Central Station if you want to experience Butao Ramen. Walk up to Lan Kwai Fong but turn right to Wellington (it comes before Lan Kwai Fong St.). For further details directions wise, click here. It may be around 10-15 minutes walk from Exit D2. They are open from 11:00am to 11:00pm daily. More of the details about this restaurant in their website: www.butaoramen.com.

Here are some of the interesting information I stumbled upon as I researched about the Butao ramen.

1. “Japanese people are very particular about creating their own dishes, so each ramen shop has different soup, noodles and ingredients,” says Masaki Hirata, executive director of the Japan National. - http://www.scmp.com/magazines/48hrs/article/1218475/rockin-ramen
- Read about this article further. It was written last 2013 when a ramen fiesta was held here in Hong Kong. It's very informative.

2. The "Limited King", one of the Butao Ramenchoices is a limited special edition of their chefs which is just randomly put together within the day. It's for the daring and the adventurous foodies. - www.openrice.com

3. The Butao Ramen restaurant in Central only has 24 seats. - www.openrice.com

4. There's actually a ramen museum that was put up in Yokohama in 1994. - www.wikipedia.com

5. Nissin's Foods' founder and chairman was a Taiwanese-Japanese named Momofuku Ando who invented the instant noodles after the World War II. The noodle soup was introduced to Japan over a century ago from China. But ironically, the instant ramen had become the greatest Japanese invention of the 20th century according to the Japanese poll as it came in variety as far as being edible just by adding boiled water. - www.wikipedia.com

1. MOVIES THAT MAY MOTIVATE THE WRITER IN YOU - looking for a selection for the New Year's weekend.

3. HOW TO BE CONSISTENT IN GOING TO THE GYM - winter, motherhood, hibernation: 3 enemies during the Holiday season. hahaha! You need this, click on!
Posted by Kyte at 3:19 AM
Labels: #wineanddinewednesday, affordable food in Hong Kong, Butao Restaurant, less than HK$100 food, where is the best noodle house in Central, where to eat in Central Hong Kong