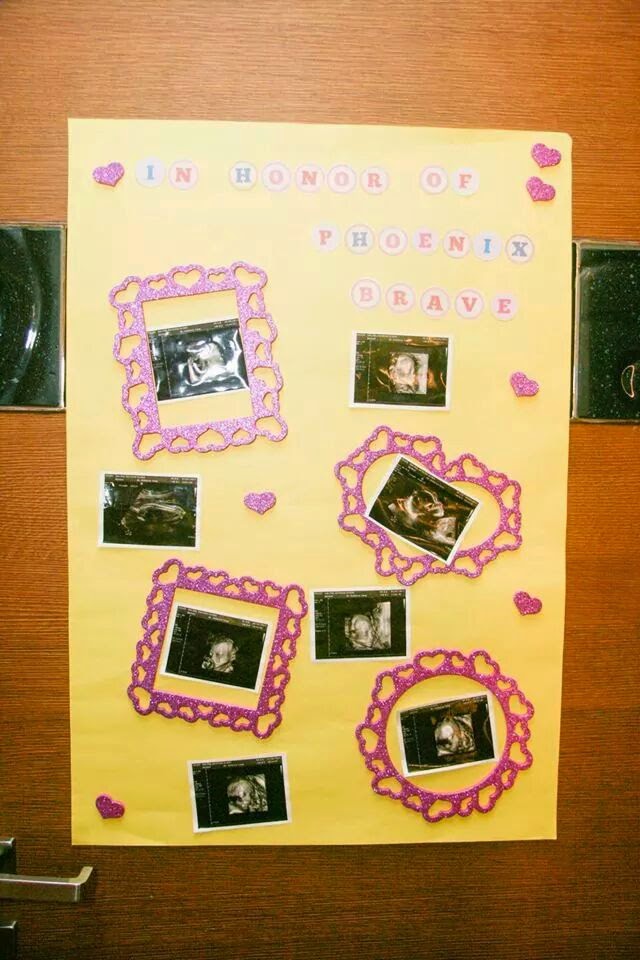 One of the most enjoyable time in pregnancy
(most especially amongst first timers), is holding a Baby Shower.
It shares the same principles with the traditional "Bridal" Shower. The only difference is that, the belle of the ball is is now carrying a "ball" in her tummy. And the focus shifts to the baby
and the bride no more becomes a mommy to be.

Baby Showers are not done just by women but by couples as well, gathering around guiding the parents-to-be into becoming the best as they could by offering advices, sharing experiences and giving gifts that would be needed during the much awaited birth. To some cultures, it remains taboo to them what is the importance of holding it. But it is very helpful in the sense that you get to be prepared at least during the first 4 months of having the baby. Read on to find out why and how.

As my good friends Aima, and Nathalie coordinated the event with me, I learned a lot about what to prepare doing it all on our own and not needing any coordinator. We are big fans of DIY that's why. So, I followed a time frame that I found in a website in preparation for the event and shared it to them as we all thought about the theme, the guests and the vibe altogether.

Of course, like any other party, you need to take note of some etiquette to consider in hosting it and some nick picks as to what games are to be done, how to decor the place and how to let the guests enjoy every moment with you.

My husband and I have a lot of friends that are beyond ecstatic about the news. As much as we want to invite "everybody", we are again challenged with Hong Kong's limitedly-spaced function rooms. There are big venues but taking into consideration my condition (34 weeks pregnant), we needed a bigger place near where we live (than our room) to hold the event. We were able to book a function room, a barbecue area and 2 bowling lanes of Central Park Towers Club House with a wishful thinking that it would fit to accomodate everybody and cater to their preferences too. It was just across the building where we live in. The baby shower games maybe just too much for the gentlemen so, after dinner, we programmed that they may enjoy an hour or two in the bowling lanes or do their boy thing in the bbq area. As proposed by my husband, this was agreed upon in a jiffy.

In my invitation, these words denoted our chosen theme for our baby shower:

"We find that the color YELLOW represents the sun
and the LAVENDER colour symbolizes tranquility and calmness.
As our little sunshine brings peace to our hearts,
we request that you'd dress up in these shades to join us in anticipation and excitement.
If in case you got nothing in lemon yellow and lavender, white could do better."


It's good to let the family, that are miles away, whom the couple or the mommy-to-be would want to be in the baby shower, know way ahead of time. For them to at least think it over if they can make it or not. We did e-vites so it was pretty handy to get hold of the people rsvp-ing and it totally gave us an estimate of the expected number of guests. I missed giving out instructions on how to get to the place, that was an error on my behalf. But over all, everybody made it to the location. The only ones we gave the invitation to are the ones who didn't have a Facebook account.

The choice of holding a baby shower should come preferably from friends so that it's not like the family that's expecting a baby are begging for gifts. It need not be too costly and may be thought upon within a group and the best choice always is to come up with a potluck. So that's what we did. 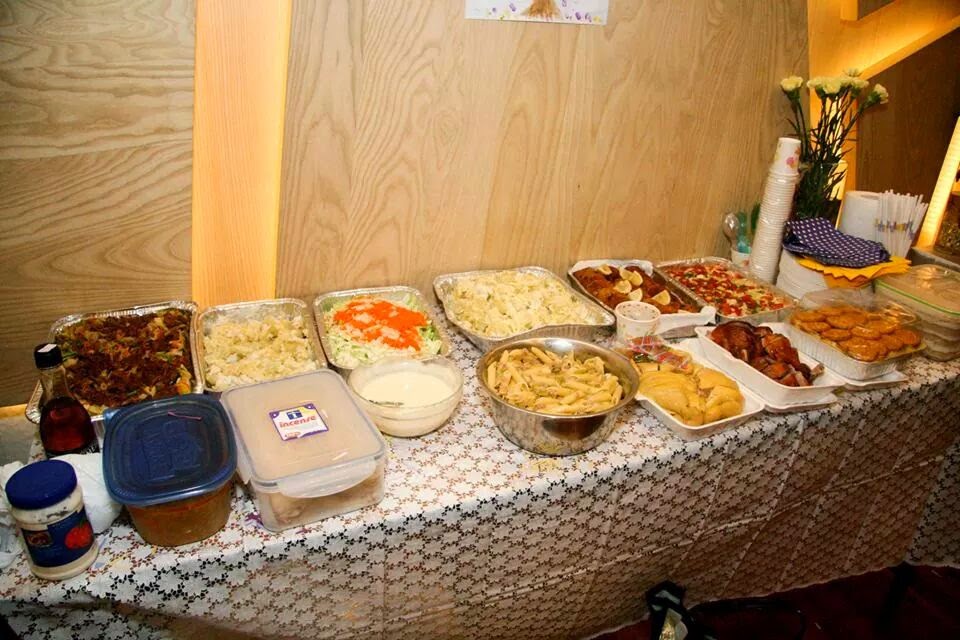 Besides the games, imposing a potluck party is a good way to involve your guests to make them feel at home and welcomed. It depends on how you want it to be intimate or informal. As for my baby shower, Ms. Bongiwe, our good friend from South Africa, suggested that since so many people are gathering up but are coming from different countries, why not make the potluck be based on the specialty of that country where they're from and bring it over at the party? So, as far as the food to bring is concerned, there was no limit.

My family maximised the use of the barbecue area by deciding to cook chicken and sausages for our share. Everybody is welcome to bring their tribe's own specialty so delicacies from South Africa, India, Samoa, Tahiti, America, Philippines, Taiwan, Japan, Hong Kong and China were present and it made the whole buffet table so festive. I believe people enjoyed the food and I for one missed on tasting some of the delicacies I was eyeing early that evening. But seeing the people laugh, talk and share the food was good enough for me. I actually forgot to ask somebody to make me a plate 'til people approached me if I was alright and if I needed help. It was hard to explain. Hahahaha! 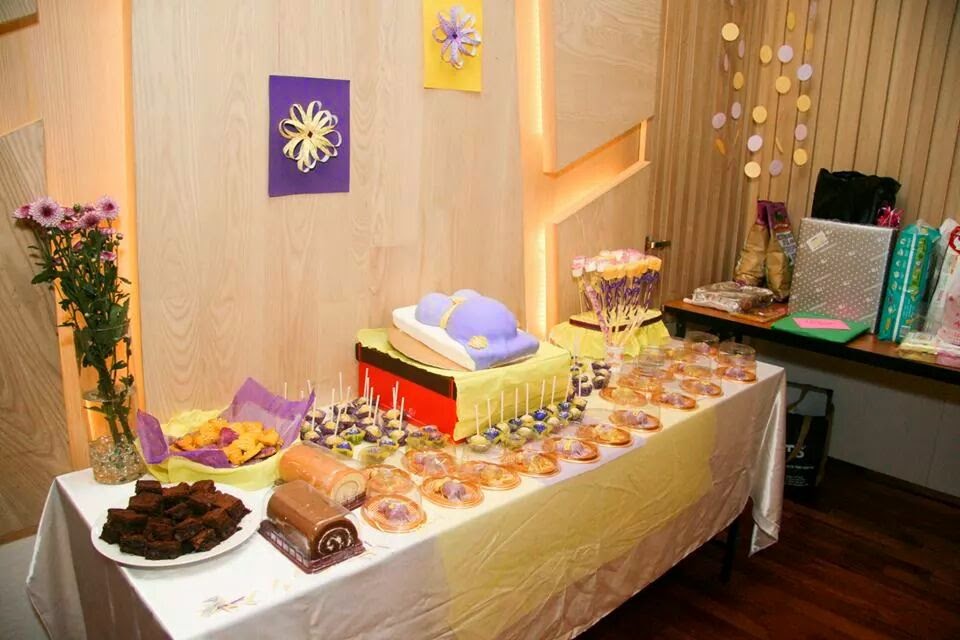 Because some of them don't know which is the PALUSAMI (taro leaves cooked in coconut milk from Samoa), EMBOTIDO (ground meat with boiled egg and spiced up with raisins and herbs molded to a long and bigger than usual size of a sausage, a delicacy from the Philippines) and SAPIN SAPIN (dessert made of glutinous rice, coconut and ube, also from the Philippines), those were the ones that remained. Hahahaha! Yes, I know majority of you don't know what they are. So, I just ate while the games were happening when the people were not overcrowding the buffet table.

Since I was worried if the place could truly hold all my guests, I chose games that did not need that much space. We had:

Again, this is a DIY game. There is an existing game of taboo and all that you need to know is that it's a word guessing game. How to play it? Click here.

So, to make it extra special, I made it the "Baby Shower Edition" having only words that is related to being pregnant, having a baby and baby shower to be guessed. I had 3 groups with 3 members each with 40 cards at hand for them to guess. First to get a score of 5 is the winner. Here is a sample 9 cards. You can make your own too. The words to be guessed are the ones highlighted in light blue.


Just have this printed out and cut them separately. Paste it on a cardboard for an instant card like appearance. You can change the colours of the cardboard to be used. As for me, I just recycled cardboards at home but it instantly gave it a fun appeal as the gamers drew out their cards from the box.

b. HOW BIG IS MOMMY'S TUMMY

Everybody was welcome to join by guessing how big my baby bump is. The good part is, only one wins so, you just have to invest on one prize for this game yet everybody gets to have fun. All they have to do is cut their piece of string according to how they estimated the actual measurement. The one who measured closest to my actual abdominal girth wins. 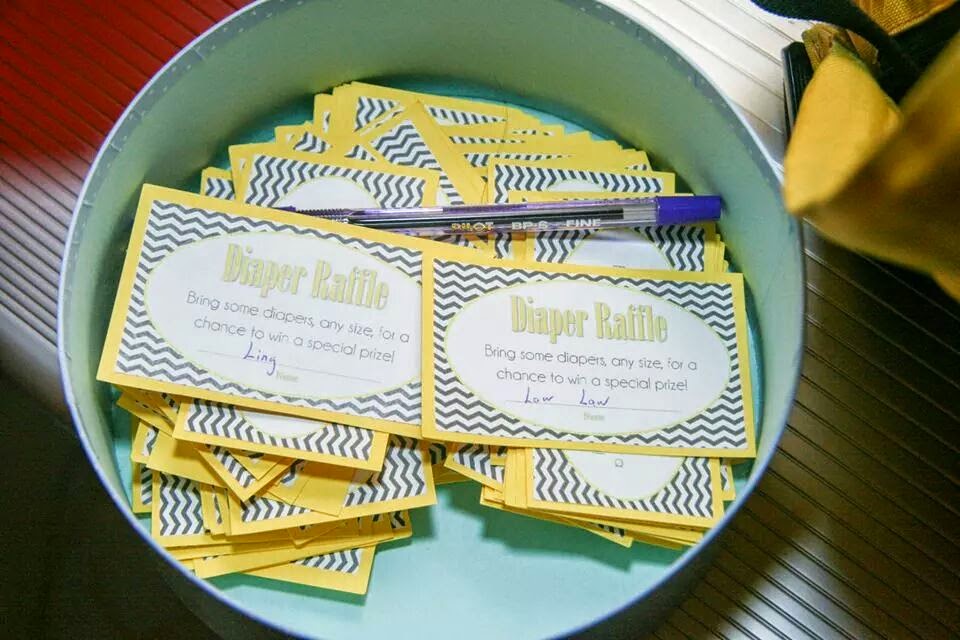 I have just researched free printables and I came across this source. Basically, it just says,

"Bring diapers or any size for a chance to win a prize."

So, I've printed it out, just pasted it on a cardboard background and voila!!! I got instant tickets. Guests would just be handed out of these as they give the diapers and they will be asked to give it back with their names for the raffle draw. Whoever's name get drawn out, will be the winner.

This is a good way of giving some guests, who are clueless, an idea of what to give in a baby shower with an anticipation that their name might be drawn out. The name is usually announced at the beginning, middle and the end of the party to keep the excitement up. Depending on how much prizes you will to give out, you can minimise the raffle draw into more than 3 or to a one-time big-time prize giving at the end of the party.

Since it's a baby shower, this game challenges everybody not to say the word "baby" for the entire party. You'll be instructed to tuck 5 paper clips to your sleeve or your collar then everytime somebody says the magic word "BABY", you may steal one paper clip from that person. The one who collects as much pins would be the winner in the end. Our winner had 17 pins on her. 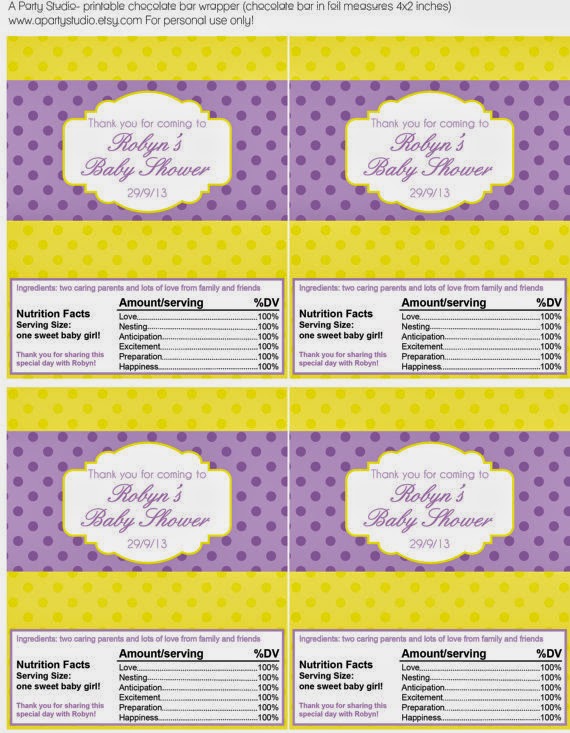 This illustration that I found in PINTEREST inspired me to decorate my baby shower treats. The original plan was to stick my own in a small plastic loot bags then people would just dig in from the dessert table of candies and treats and that would serve as their party favour to go. However, it could end up being out of control so, I bought Hershey's bars and glued my label on it that looked like these... 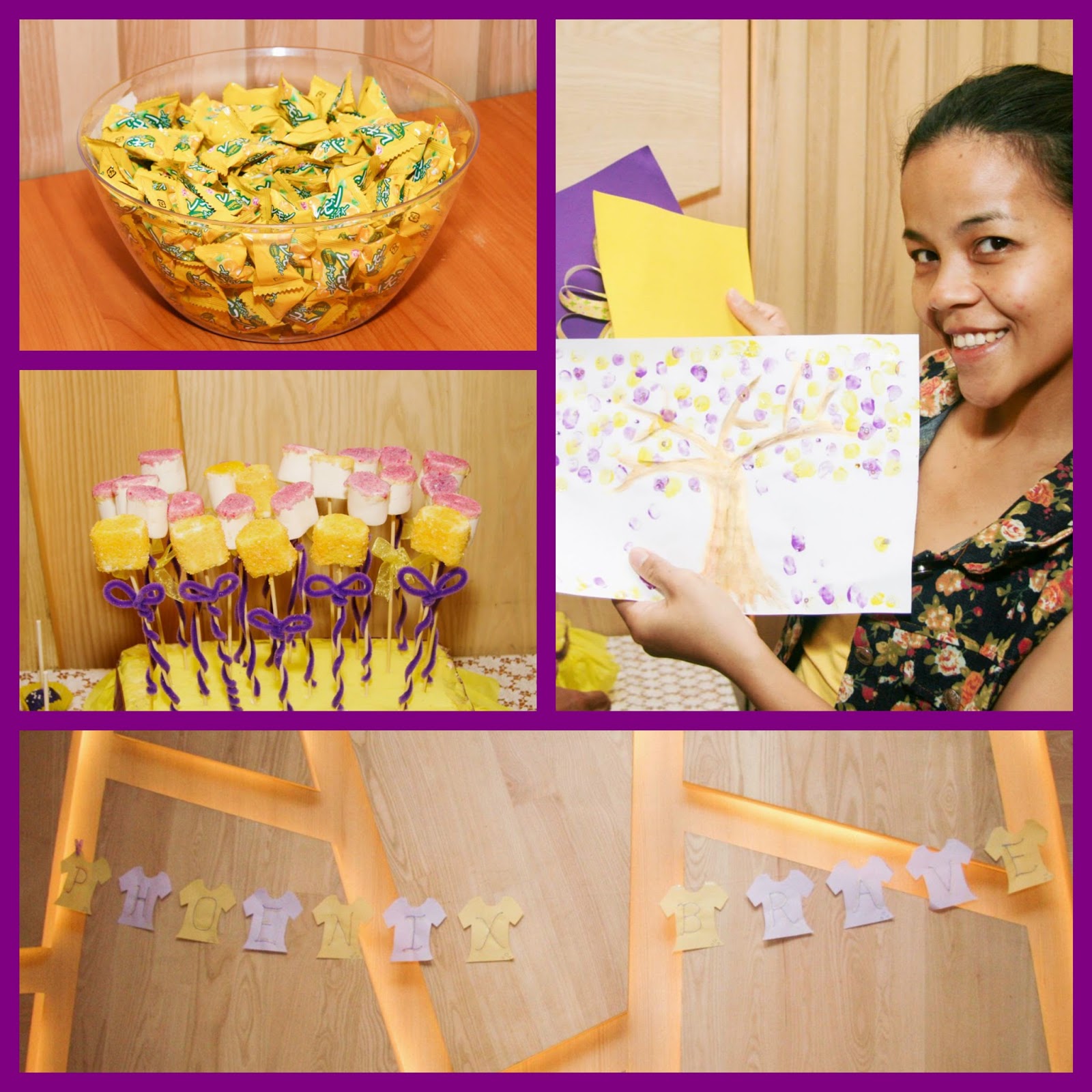 I am a minimalist. I don't like too much clutter so we have decorated the function room alone in the simplest way. We all had just put up a welcome poster, instructions for the game, banderitas in the form of small baby shirts and some finger painted crafts by Nathalie's daughter, Zaia. A poster background where people could consider the background for taking a photo in and we just thought of the dessert table to be kept the centre of yellow and lavender vibe. 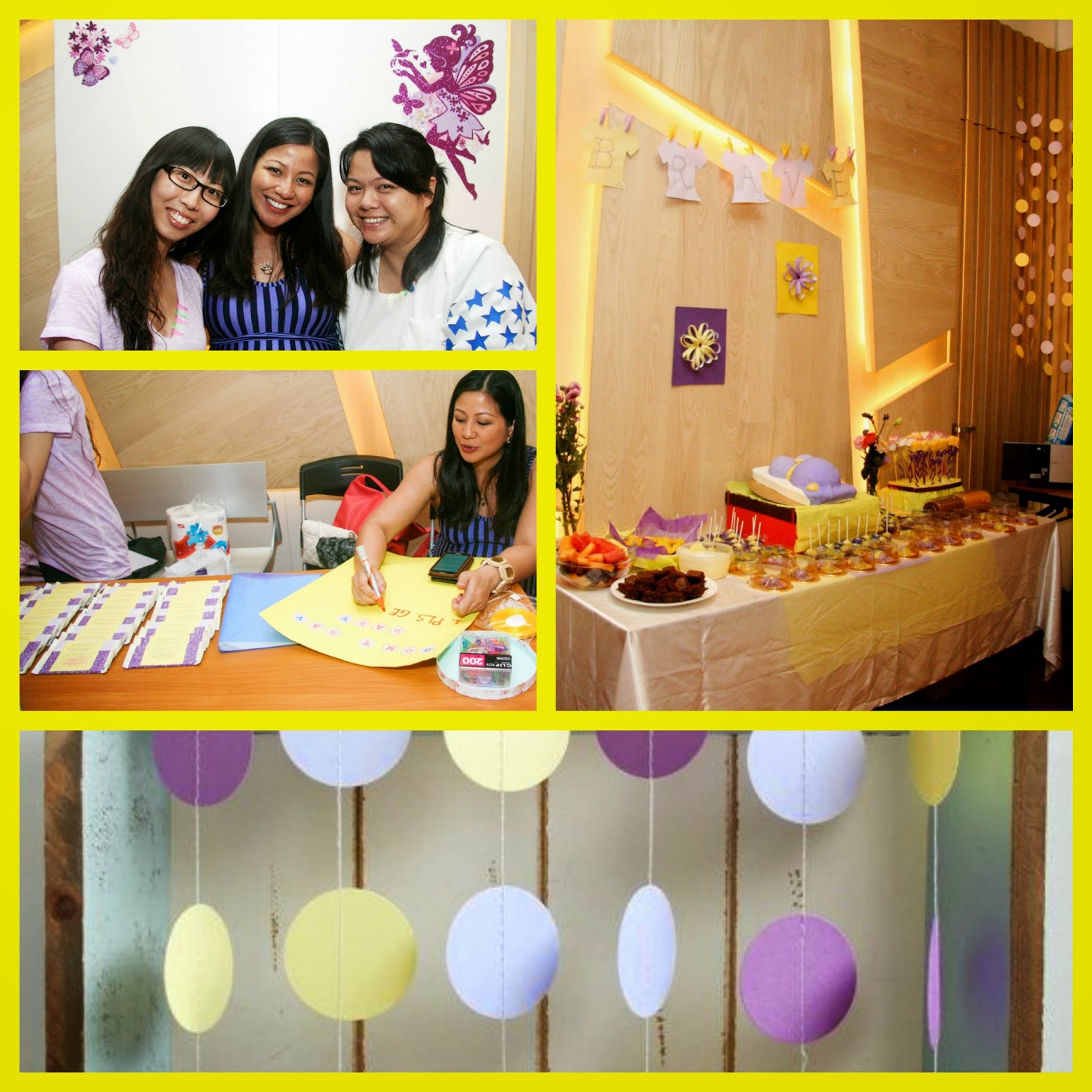 We also planned for the cake to be the highlight of the dessert table with its big bump. And the mini cupcakes were planned to be giveaways also. And I'm more than delighted with all the fantastic flavours it oozed out. Chocolate, Red Velvet and Strawberry. 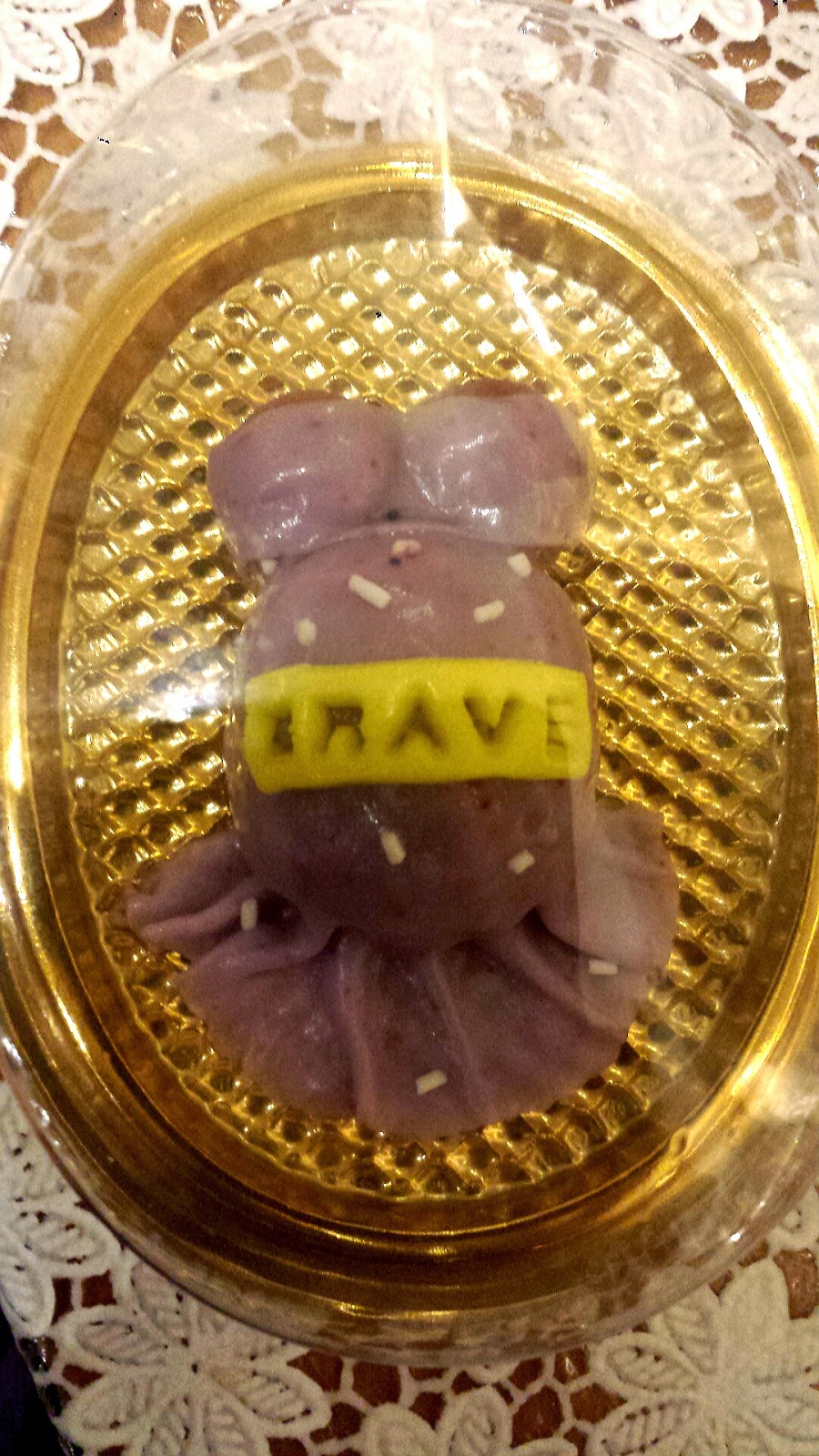 Some memorable keepsakes could include photos but there's a good way to hype that up by asking your guests to fill up the baby libs, a.k.a. the sheet for the best advice Mommy could get hold of as she becomes a mom. I encourage you to write your own depending on how perky you want it to be.

So those are the nick picks that I can share to you. I hope that you could get some ideas from this post and if there's something that you need to ask, let me know by writing it down below. Also, you may suggest any source of downloadable printables to us by leaving it thru the comment box below. Much thanks!

1. BABY BRAVE'S REGISTRY - what I thought I would need as I expect my first baby

2. EXTENDING A HEARTFELT THANKS - instead of the usual "Thank You" card, I had posted a note for all those who came in our baby shower and most especially the ones who had helped me out.