It was a great Saturday afternoon to ogle over TFC.tv's livestream of the 2015 UAAP CDC all the way from Hong Kong that featured 8 universities continuously battling over the bragging rights of being the Champion of this annual cheer dance competition.

As a cheerleader myself, I can't help but get hooked and be supportive of my own group, the UST Salinggawi Dance Troupe. Along with the best couch partner, my daughter, Brave, I allowed myself to criticise each participant according to pure personal opinion. To all of you who weren't able to watch, here are the links to each school as per real sequence on the very day.

I honestly thought it was a very good starter. They have set a difficult standard for the rest of the competitors to beat. The level of difficulty of each stunt was undeniably high.

Personally, I find their usage of rock music to keep a cheer dance routine up to be a suicide. Everything was all good but the music pulled the vibe down. The message of infusing every deed they do with heart and mind revived it though. So it was smart to put the last blow of the routine at the end. Overall, they did a great job. UP had won Best in Pyramid and Best in Toss (NO FEAR dive to a 3rd level tango lift was superb!) with minor fallbacks and the same pyramids as before.

But I agree to most of the commentators (favouring UP) that when you are the first to perform, judges hold back when grading. They have the tendency to be strict that no matter how good the performers are, their grades are expected to be meticulously low. As you watch the rest of the performers, your emotions escalate directly with the expectation that the next one should be better than before to earn high grades. Theoretically speaking, judgement becomes inconsistent this way. Because the panel gives the paper after scoring each group to a designated personnel right after each routine. You'll understand later as I go further.

2. Next to UP, was DLSU ANIMO SQUAD


OK, it was a given. From the beginning, you could tell some of their dancers were not that confident in executing their stunts. Like how my outright comment goes in my FB status, it looked like the sound editor/manager was going thru something with his/her choices of music to be put together in coming up with the routine. "Lips of an Angel", I loved that song. But... seriously? I got no more words hearing that in their routine.

I AM SORRY. But it is a shame that they have the funds to get trained well and they don't get to utilise it to the maximum. The nastiest tweets are owned by the Ateneo Blue Babble Battalion this year that goes: "Oh, Ateneo Blue Battalion is next? OK, that calls for a bladder break!". I don't mean to be negative but this is just stating the real comments. Mine went: "Oh! Their theme was James Bond, I thought it was Mission Impossible" from the choices of stunts to be performed looked i-m-p-o-s-s-i-b-l-e!!!!! They weren't able to deliver. I like their costume though, since my favourite colour is BLUE.


They didn't fail to put spectators at the edge of their seats. For 3 years now, they are consistently reigning. But compared to their previous performances, I'm pretty sure they are disappointed. It was such clean, perfect execution from last year to a lot of major falls that were hard to ignore. They will forever own the labels, "monsters or aliens" because of how strong they are with their thumblings and tosses that it gave the judges another platform for setting their standards again from this point on in comparison to how they have set U.P. in the beginning. Because of the excitement that had built up, the scores became super high and hard to beat. I'm pretty sure by this time, some of the judges had already forgotten how good the UP Pep Squad was in the beginning.


"CIRCUS" for a theme is always risky.
But UE managed to control its tendency to be chaotic
by performing their routines as clean and perfect as possible.
Galing! Clap clap clap."

That was my opinion right after watching UE perform their entry in the 78th CDC. But watching it again made me see the major falls. I must say they need to know the pulse of each other more. The tosses were high and since my Salinggawi days, they own those sturdy bases responsible for the  high basket tosses. By this time, I can't wait to watch UST already. But they don't come 'til the last one.


By this time, I am tired of seeing a 2 straddle jump to a back tuck stunt. (I mean, gosh! What's with it???!!! Why are all the schools doing it?) However, I find Adamson the most promising in aspiring to be in the top 3. They were consistent with their theme, they started strong and aimed to finish strong. And their theme was most unique. But modelling to be infused in a cheering routine? Never mind.

You could totally see that each of their cheering squad members worked hard in doing this dance. There are a lot of newbies I could tell as I've observed the first time I saw their routine. You could tell who are the seniors because they are keeping up the fight as shown in some of the shots. FEU's choreography and blocking are always clean. Their entry consisted of a lot of types of dances namely, broadway, circus (same with UE) and breakdancing. They are very very strong kids but because of that much work up, major falls happened that had made them lose huge amount of points.

It is expected that UST, a champion for 8 times alongside UP, will be giving out a good fight since it had always been a tradition of the Salinggawi Dance Troupe to aim and land as the best. For me, they deserve to win for a perfectly executed routine. Call me biased but UST has the most minimal number of errors. That alone would be enough as basis. I am more than proud of this year's performance. My husband (who is not a cheerleader at all) alone had goosebumps with the opening chants of the group. And I remained overwhelmed until the end.

Now, it is pretty controversial how NU got the first place, UST got the 1st runner up award and lastly, UP landing on the 3rd place. Looking at the score sheet, critics had written posts about discrepancies in how the judges had come up with their grades. With my experiencing in judging beauty pageants and competitions, I make use of individual category scoring but I don't choose my final 3 until the end of the last criteria for judging had been done. This way, I could readjust if it's necessary. I put small notes also at the side for the highlights that is worth remembering. But then again, that's just me. And there's no chance for UAAP's CDC judges to make amends as they pass the score sheet right after each school presents their dance. 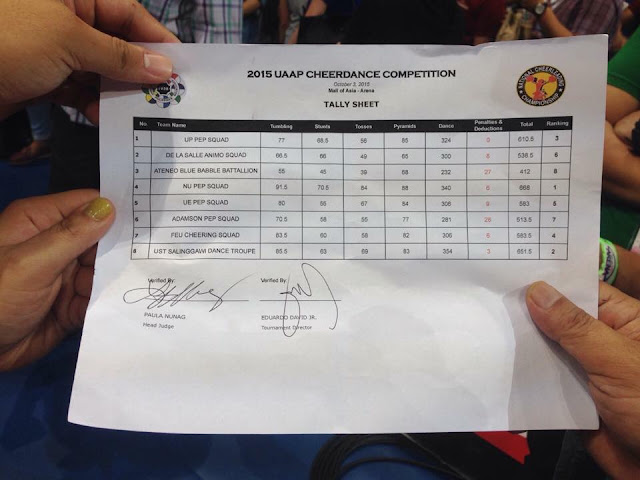 I want to end my post with a HUGE CONGRATULATIONS TO Kuya Ramon Pagaduan IV and the rest of the UST Salinggawi Dance Troupe 2015 Competitors. Saludo po ko! I believe you deserve more than 1st runner up but it still comes as a blessing.

Related posts:
1. TEAM PILIPINAS ALL GIRLS ELITE - Check out these silver medalists!
2. NATIONAL DANCE DAY - a tribute of how my passions led me to where I am now
3. A RECAP - What I was thankful for way back 2006
Posted by Kyte at 6:30 PM
Labels: #swagginsaturday, cheering, UAAPCdc2015, UST Salinggawi Dance Troupe